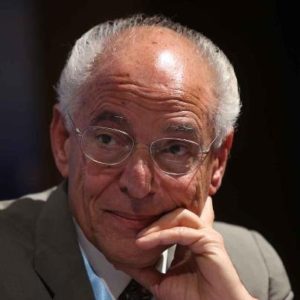 Dr. Farouk El-Baz is an Egyptian American space scientist who worked with NASA to assist in the planning of scientific exploration of the Moon, including the selection of landing sites for the Apollo missions and the training of astronauts in lunar observations and photography.
Farouk is currently Director of the Center for Remote Sensing and Research Professor at the Departments of Archaeology and Electrical & Computer Engineering, and Associated Faculty at the Department of Earth and Environment, Boston University, Boston, MA, U.S.A. He also serves as faculty advisor to two Boston University student organizations: the “1001 Wells for Darfur,” and the “Egyptian Club.”
He was born on 2 January 1938 in the Nile Delta town of Zagazig. Twenty years later, he received a B.S. in chemistry and geology from Ain Shams University. In 1961, he received a M.S. degree in geology from the Missouri School of Mines and Metallurgy, Rolla, MO; his performance won him membership in the honorary scientific societies of Sigma Xi and Sigma Gamma Epsilon. In 1964 he received a Ph.D. in geology from the University of Missouri-Columbia after conducting research in 1962-1963 at the Massachusetts Institute of Technology (MIT), Cambridge MA.
In recognition of his professional standing, he received the following honorary degrees: Doctor of Science from the New England College, Henniker, NH (1989); Professional Degree from the University of Missouri-Rolla (2002); Doctor of Philosophy from Mansoura University, Mansoura, Egypt (2003); Doctor of Laws from the American University in Cairo (AUC), Egypt (2004); Doctor of Engineering from the University of Missouri-Rolla – now the Missouri University of Science and Technology, MUST (2004); Doctor of Humane Letters from the American University of Beirut (AUB), Lebanon (2009).
Dr. El-Baz was elected to membership of the following academies of science and technology: The World Academy of Sciences (TWAS); African Academy of Sciences (AAS); Arab Academy of Sciences (AAS); Islamic World Academy of Sciences (IAS); Missouri Academy of Sciences; Palestine Academy for Science and Technology; Royal Moroccan Academy Hassan II of Science and Technology, Rabat; and the U.S. National Academy of Engineering (NAE).
For more information, visit: http://www.bu.edu/remotesensing/faculty/el-baz/