Skip to content
Natural disasters and extreme weather events are on the rise. The impact of droughts, extreme temperatures, hurricanes and wildfires have all increased over the last 60 years. But it is floods that has taken the biggest toll on the world in recent times.
According to the UN Office for Disaster Risk Reduction (UNISDR), flooding accounted for 43 percent of all natural disasters between 1995 and 2015. In this period, there were over 3,000 flood disasters, affecting around 2.3 billion people.  In 2016 alone, flood peril caused $62 billion worth of damage worldwide.
In its The Human Cost of Weather Related Disasters report, UNISDR warns that the impact of flood disasters is becoming more severe, affecting ever wider areas while the population living in these vulnerable regions rapidly rises.
The likely rise in sea levels due to climate change will further exacerbate this threat. Scientists predict that there will be a 10cm-20cm rise in sea levels by 2050, doubling the frequency of coastal flooding across the tropics.
This is particularly a threat in lower and middle-income countries where socio-economic development has seen mass urbanization and deforestation. It is no surprise that of the 20 cities most vulnerable to flooding, 14 are in the developing world, five of which are in China and four in India. These countries are also vulnerable to weather-related flooding, especially in the summer months as rainy season and tropical storms like the annual Atlantic hurricanes hit, devastating communities. But the developed world can also be hit hard – in August 2016, floods in the U.S. cost $10-15 billion in economic damage, while the floods that hit northern Europe earlier that summer caused damage in excess of $5 billion.

A serious flooding event impacts society on many levels, both in the short-term devastation it causes and the long-term recovery that follows. And the consequences of floods are often hard to predict.
“The ripple effects are tremendous,” says John Dickson, President of NFS Edge Insurance, Aon. “When you think about a flood impacting a community, it is not just property that is damaged – everyone is affected. Where are you going to get groceries for your family? How do delivery trucks or emergency vehicles get to the area when the roads are washed away?
“The impact of floods extends far beyond risk of loss to physical structure and threatens the infrastructure that enables the daily interaction of individuals and makes communities possible.”
This may mean long-term disruptions not only to a community’s transportation network but also its supplies of clean water, food, electricity, and communications. This in turn can lead to disease, malnourishment, and further long-term human consequences that can have an economic impact far beyond short-term supply chain and business interruption.
The Economic Cost 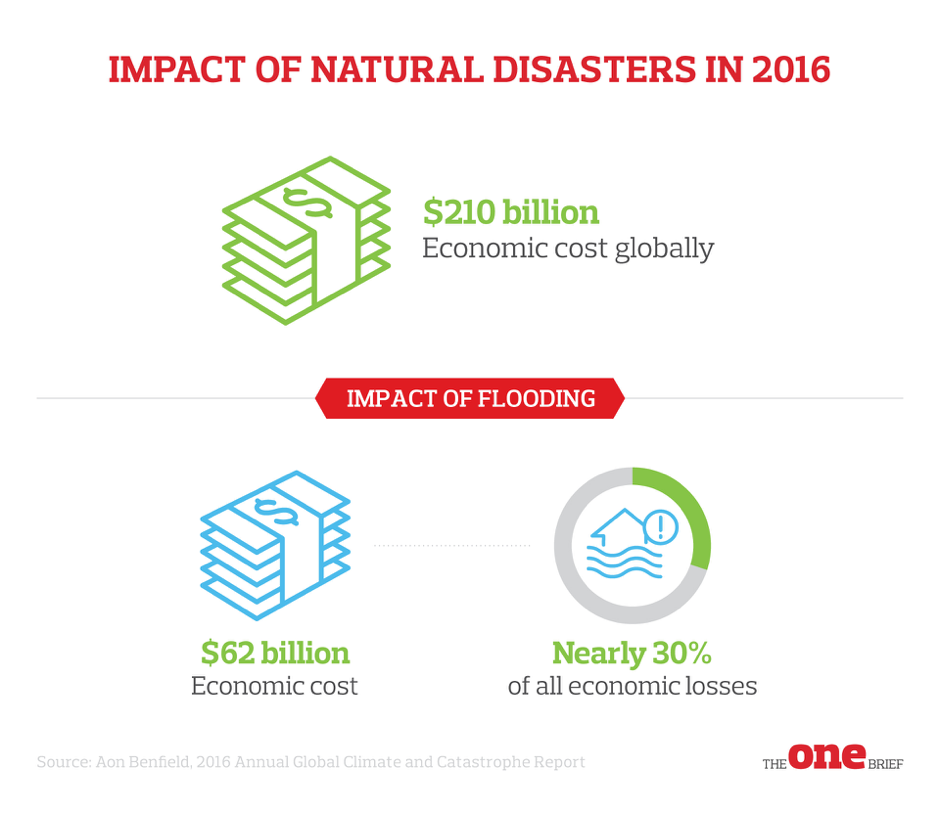 The financial impact of flooding also continues to grow. Beyond the initial damage to property, destruction of crops, or loss of livestock, the long-term economic costs can be wide-ranging and hard to predict.
Damage to public infrastructure affects a far greater proportion of the population than those directly inundated by the flood. Loss of livelihoods, reduction in purchasing power and loss of land value in flood zones can leave whole communities economically vulnerable.
Aon estimates that global natural disasters in 2016 combined to cause economic losses of $210 billion, an amount 21 percent above the 16-year average of $174 billion. Flood peril alone caused $62 billion worth of damage – on top of the $560 billion in economic losses caused by floods between 2006 and 2016. This makes flooding the most expensive type of natural disaster over the last decade.
It is of course the most densely populated areas that suffer the largest economic impact. The costliest weather event of 2016 was the summer floods along the Yangtze River basin in China, which caused damage of upwards of $28 billion. The floods threatened up to 80 million people.
On the other side of the globe, in the past 15 years we have seen the two costliest natural disasters in U.S. history during the Atlantic hurricane season. In 2012 Superstorm Sandy caused an estimated $65 billion in damage, while the cost of Hurricane Katrina in 2005 is believed to be greater than $100bn.
The Humanitarian Cost 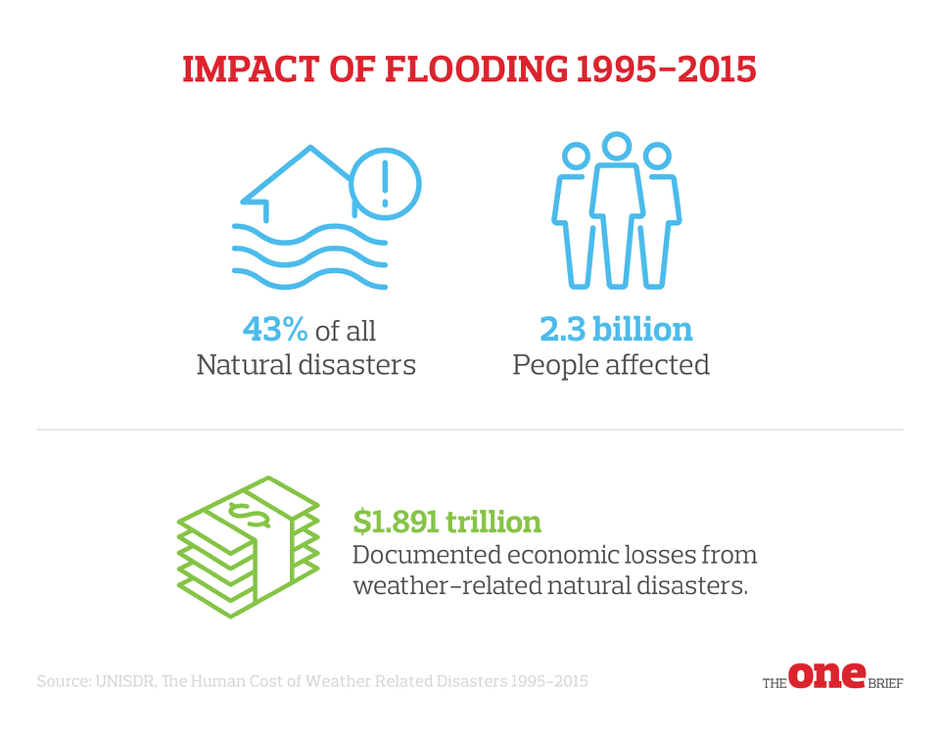 The greatest toll of a flood disaster on society is always any loss of life that might occur. As the world’s population grows and becomes increasingly centered in large cities, the potential for a humanitarian catastrophe grows.
The UNISDR estimates that between 1995 and 2015, 157,000 people died as a result of floods, and that death tolls from flooding rose in many parts of the world during this period. In 2007, floods killed 3,300 people in India and Bangladesh alone. In 2010, flooding killed 2,100 people in Pakistan and another 1,900 in China, while in 2013 some 6,500 people died due to floods in India.
While floods strike Asia and Africa more than other continents, they pose an increasing danger elsewhere. In South America, for example, 560,000 people were affected by floods on average each year between 1995 and 2004. By the following decade (2005-2014) that number had risen to 2.2 million people, nearly a four-fold increase.
Rapid urbanization in these regions has significantly increased surface run-offs, while recurrent flooding of agricultural land, particularly in Asia, has taken a heavy toll in terms of lost production, food shortages and undernourished people in rural areas.
In rural India, for example, children in households exposed to recurrent flooding have been found to be more stunted and underweight than those living in non-flooded villages. Children exposed to floods in their first year of life also suffered the highest levels of chronic malnutrition due to lost agricultural production and interrupted food supplies.
Managing The Risk 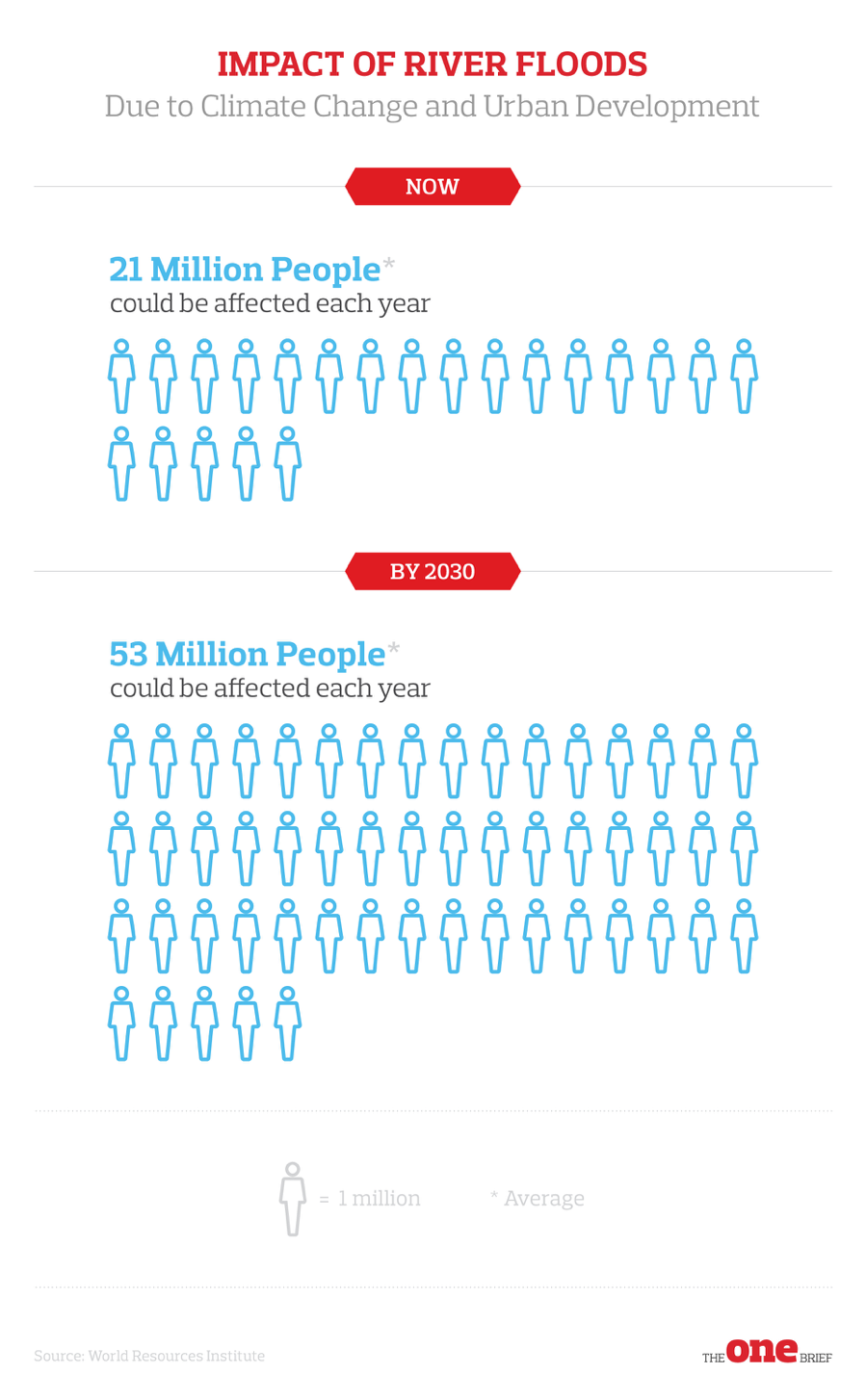 The nature of the flood peril is highly changeable, with flash floods, acute river and coastal flooding increasingly frequent.
But new data tools, analytics and modelling help us to improve our predictions and prepare for and mitigate these events. The highly flood-prone country of Cambodia is one region where these new tools have been put to good use.
By analyzing flood patterns along the Mekong River delta and combining them with a range of other key risk indicators from topography to population to soil saturation levels, sophisticated analytical tools have been able to help relief workers better predict where the worst of the flooding is going to be and provide a more effective response. Similarly, sophisticated analytics are also beginning to be used by insurers to get a more accurate understanding of the likely impact of flooding on businesses and individual properties, improving pricing and community resilience.
Even companies such as Facebook are forward-thinking how their platforms can use data collected from users to help communication during disasters. The social network recently introduced ‘disaster maps’ to help organizations better respond when such events occur
Ultimately, as the world’s population continues to grow and is increasingly centered in vulnerable urban areas, the risk and impact of flooding will inevitably rise. The number of people affected by river flooding around the world could almost triple over the next 15 years to 54 million because of climate change and population growth.
As Steve Bowen, Director & Meteorologist at Aon, points out: “The combination of more people, more vulnerable exposure and more intense weather events poses a unique challenge for the insurance industry and beyond.” And the ability to cope with the growing risks that each of these factors bring will be key, as “flooding, both coastal and inland will remain as one of the riskiest perils.” If these trends continue, Bowen further explains, it is increasingly likely that we will see further growth of catastrophe losses around the world on an economic and insured scale for all perils – not just flood.”

“The rapid growth of urban populations along the world’s coastlines – a result of natural population growth and economic migration – combined with the increasing threats from climate change, are set to expose more than a billion people to coastal flooding by 2060.” –Dr Alison Doig, Christian Aid
“Even small changes in mean sea level can significantly increase the frequencies with which critical thresholds are exceeded. For coastal communities that means they need to adapt in order to prevent flood events from happening much more often.” – Thomas Wahl, professor of coastal risks at the University of Central Florida
“Talk to any flood industry participant, be it policymakers, FEMA officials or insurance companies, and (regrettably) they will be able to recite one of the best-kept secrets in the country: flooding is the most catastrophic and costly natural disaster in the United States.” – Louis Hobson, CEO of Aon National Flood Services (NFS)